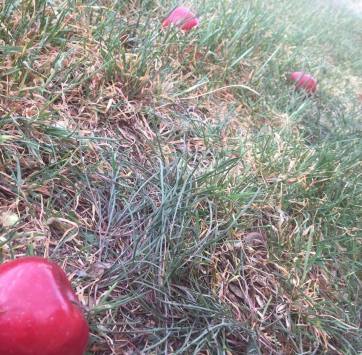 Mary Louise stole Uncle Romeo’s lion tooth necklace off the table and ran out the back door. Uncle Romeo always said that the tooth would bring courage to the wearer, and he would know, being a stuntman for the circus and all. Mary Louise knew stealing was wrong, that Mother and God would be angry with her, but she was the only one who needed courage right now. She was really just borrowing it. God would understand. And if she was quick enough, Mother would never find out.

Besides, it was Mother who sent her out anyway, even though she knew Mary Louise didn’t like walking the farm alone. She had told her to fetch some apples so she could make dumplings for everyone during Uncle Romeo’s visit. Everyone else got to stay inside and listen to Uncle Romeo’s stories, but she had to fetch apples from all across the farm. Fetching things for Mother always fell onto Mary Louise. She wanted to protest when Mother had told her to get the apples, but didn’t want appear childlike in front of Uncle Romeo.

She slipped the lion tooth necklace over her head as she crossed through the gardens towards the apple tree. This farm was so much bigger than the one back in Ohio where they barely had room for Father to grow his wheat. But here they had gardens and chickens and even a pond, all surrounded by a great big wheat field. Mary Louise hadn’t gotten used to it yet. She didn’t like being alone in such open space.

She plucked an onion stalk to chew on as she cut through the gardens. And she circled around the chicken coop because she hated the way the chickens would rush at the cage and startle her. Past the chicken coop and over a hill by the pond stood the apple tree. Mother was so excited about having an apple tree, even though this one was rather small and not the greatest producer of fruit. Still, Mother loved the tree so much she insisted father put a fence around it to protect it from any greedy creatures wanting her apples.

At the top of the hill Mary Louise froze, dropping the onion stalk from her mouth. She grabbed the lion tooth hanging over her chest and felt her heart pounding. The biggest, most monstrous boar Mary Louise had ever seen thrashed about in a hole carved out under the fence. It was easily twice as big as any boar she had seen in Ohio, and it didn’t just have nubs for tusks: these tusks could stab straight through a grown man’s hand. Blood ran down its bristly haired body where it was cutting itself under the fence posts. Apparently the beast had been working its way to the apple tree and unwittingly pinned itself. It grunted and kicked futilely.

Mary Louise rubbed her thumb over the lion tooth and fought the urge to run back to the house. The boar struggled below her, seemingly unaware of her presence. She picked up a dirt clod and tossed it at the animal’s backside and ducked behind the hill. She peeked back at the boar, which only grunted and squirmed as it had before.

Mother had said to fetch seven apples, one for everybody to have their own dumpling. Inside the fence, Mary Louise spotted some scattered apples. With one hand clutching the lion tooth and the other holding the burlap sack, Mary Louise started down the hill. The boar had dug his hole near the gate, so she climbed over on the opposite side, trembling as she did so. Halfway over the fence her eyes met the hollow yellow eyes of the boar. The fence wobbled and Mary Louise tumbled towards the tree, only a few feet from the beast’s enormous snout. She scrambled upward and backed up into the fence. Despite the boar’s wild flailing, he remained stuck in place. Mary Louise opened the burlap sack and scrambled around the tree, picking up apples, always keeping an eye on the boar.

She gathered six; just one short. The tree had already dropped most of its fruit. She saw a ripe apple she could reach if she climbed the trunk a short way, but she would have to take her eye off the boar. She stuffed her foot into a knot in the trunk and reach for the nearest limb. Then she saw the entire fence was shaking violently. She turned around just as the posts pinning the creature snapped in half. The boar broke free and the fence collapsed. Without thinking, Mary Louise heaved herself into the tree, narrowly avoiding being gored.

She clamped herself to the branch while the boar rammed itself repeatedly into the trunk. She dropped the sack of apples and the boar mindlessly trampled them. Apple bits and pieces of bark flew into her face. The lion tooth whip-lashed around her neck until Mary Louise snatched it, but the shaking caused the necklace to snap and she lost her grip of the branch. Mary Louise plummeted downward. However, instead of hitting the ground to be trampled like the apples, she landed on top the boar’s back. This surprised the boar as much as it did her, and for an instant it halted its assault. Mary Louise realized she still held the lion tooth. She latched herself around the beast’s neck before it started bucking, and she stabbed the tooth repeatedly into its eyes.

(Fiction and Photography by Wesley Martin)