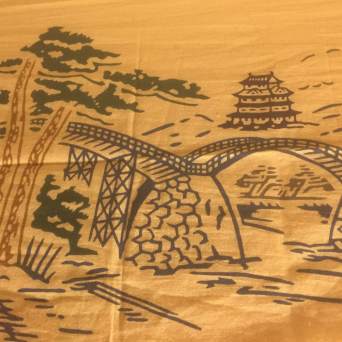 “You gotta be shitting me,” Gulliver said for maybe the third time since striking up a conversation with the Asian guy whose car broke down along the freeway near the store. “You traveled all this way, halfway around the world, just because of some fortune teller? That’s one of the craziest damn things I ever heard.”

Edmond couldn’t help but overhear the conversation, or at least Gulliver’s half of it, while restocking the beef jerky on the opposite side of the shop. Fortune teller vaguely registered through Edmond’s zombie-like state, but over the years Edmond had come to tune out most of things Gulliver lauded over with the customers.

The Asian guy laughed and said something Edmond couldn’t make out, but he could tell the guy had an accent.

Edmond checked his watch. Only forty-two more minutes before he could go home and binge on some National Geographic.

“So what kind of treasure are you expecting to find out here?” Gulliver asked the man.

“I don’t know for sure. Gold and jewels, maybe,” the man said. “But she also said I’d find treasures worth far more than anything I could imagine.”

Edmond jutted up from the aisle to face the foreign traveler. Mid-twenties, wearing a polo and khakis, grinning like he just got off an amusement park ride.

“And you believed that?” Gulliver gawked. “Sorry, buddy, but it sounds like a scam to me.”

“Maybe.” The traveler shrugged. “However, I paid the fortune teller nothing. She told where to find the treasure in exchange for ten percent of what I find. Why would she do that?”

Edmond glided out the jerky aisle, intently watching the two men chat at the counter.

“Well, you got me there.” Gulliver said. “But not everybody would just up and leave like you did.”

The traveler’s grin faltered momentarily. “Well, it wasn’t as easy as that,” he said.

Gulliver pointed out the front windows to a tow truck coming down the freeway. “Buddy, you’re ride is here.”

“Wonderful,” the traveler said. “Hopefully it won’t cost a fortune to get that thing fixed, cuz I haven’t found mine yet.”

The two men laughed. Edmond stared wide-eyed at them from the slushie machine. The traveler thanked Gulliver for the phone call and the company, then moved for the door.

“Hey,” Edmond called out. The man stopped and turned around.

“Where are you from?” Edmond asked as he walked towards him.

“I-yeah.” The traveler cocked his head at Edmond. “How did you know?”

Edmond stopped directly in front of the man, next to the sunglasses kiosk. Their reflections bounced back at them from the dozens of lenses.

“I saw a fortune teller once. She told me that if I traveled to Nagashino Castle in Shinshiro I would find a great treasure.”

The man looked Edmond in the eyes, then left the store.

“Holy Hell, Edmond,” Gulliver said. “What was that about?”

Edmond watched the traveler hop into the tow truck and vanish down the freeway.