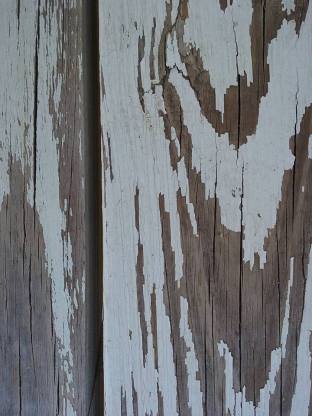 Cattle dotted the area like ink stains, the setting sun washing the desert landscape in the piercing glow of its final rays. The further Ian traveled onto the old man’s private property, the more reluctant he became. If he got caught it wouldn’t be the end of the world. The owner would probably just ask him to leave—maybe wave a shotgun around—and Ian would do so, gladly and without complaint. But getting caught meant never knowing for certain. And having already experienced what that uncertainty felt like for the better part of a month, he wasn’t sure he wanted to continue.

He passed a low rise in the land and a building came into view, painted black with shadow against the blazing orange horizon. His palms suddenly felt uncomfortably damp where they were wrapped around the steering wheel. His stomach rolled with a sudden wave of nausea. As he drew closer, its features grew more distinct and were eventually illuminated by the headlights of his truck. A low wooden fence roped off the area immediately next to the shack, a chicken coop built inside but long forgotten. The busted bulb secured above the door dimly reflected the dying light and a fresh black and orange ‘No Trespassing’ sign shone like a beacon from beneath it.

Ian pulled over, turned off the engine, and climbed out of the truck, greeted immediately by the scent of ozone and the light, chilly breeze the passing storm had left behind. He shut the door.

Approaching the shack felt akin to approaching a wild animal, haunches raised, teeth bared. The once-white walls were now weathered and peeling, its scaly exterior offset by the ancient plywood nailed over its windows. Choosing to forego trying the clearly locked door—a brand new one, looped through a fresh latch—he instead circled the area, finding nothing but a few more boarded windows and a fat, brown tarantula resting on a pile of rocks. There was no way to get inside. Not anymore.

Why choose here of all places? Ian paused once he’d completed his loop and touched the cold aluminum sign nailed to the door. There were thousands of other places John could have chosen. What was so special about an abandoned shack in the middle of a stranger’s ranch? Ian futilely tugged at the lock. It wouldn’t budge. He knocked a large fleck of ancient paint away in frustration, desperate to leave some sort of mark. He made another circuit around the perimeter.

In the back, a slender crack between the plywood and the glass-less window offered a cumbersome opportunity to glimpse inside, and Ian pressed his forehead against the ancient wood, closing one eye. Nothing much lay inside: only a small, dark, empty room with concrete floor, dusty and forgotten. Above, he knew, there were rafters. But nothing hung from them anymore. Surely not. He stepped back and breathed.

Against the dying light of the sun, the tarantula scuttled away.

(Fiction and Photography by Kayleen Burdine)